"Is That Safe?" Part I: Motor Homes, River Mouths, and Other Hazards, Real and Not


I don't know how many times I was asked that or something similar (or simply told it wasn't safe) when I mentioned my plans to hike the Oregon Coast Trail. I’m not sure what most alarmed people. Probably it was mostly about my being alone, and being a woman. And, frankly, I think it is more a reflection of the pampered lives most of us lead: warm, dry, and predictable. Not everyone hears the call of the wild.


But let’s pause for a moment and consider possible hazards on the Oregon Coast Trail, some of which are very real. 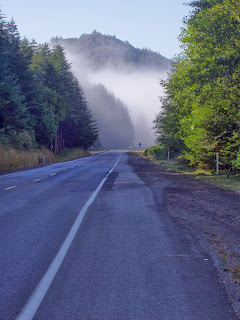 #1: Getting hit by a car
This is by far the most dangerous aspect of the OCT, IMO. Even if you manage to hitch rides across most river mouths, you will be doing some walking on the side of US Highway 101 and secondary roads. Accidents of this kind happen to long-distance hikers all the time. Earlier this month, for instance: Joe Bell, the father from Eastern Oregon who took off on a kind of cross-country vision quest in the wake of his bullied 15-year-old gay son’s suicide, killed by a careless driver in Colorado. Fortunately for OCT hikers, Oregon state parks folks continue to create off-road OCT routes where there is no beach, most recently north and south of Depoe Bay. Frankly it’s probably safer to hitchhike in some places—which is what I did rather than walk through the highway tunnel just south of Heceta Head Lighthouse (after watching a motor home creep through, nearly scraping the sides). (Photo: Southbound along US 101 south of Humbug Mountain.)

#2: Getting eaten by a bear (or other wild animal)
Not likely. There are black bears on the Oregon coast, but they’re small (females are 5 to 6 feet long, 125-200 pounds, i.e. my size), shy, and mostly vegetarian; if you’re lucky, you might catch a glimpse of one, but probably not. Cougars? I have never heard of cougars being a problem on the coast. Plenty of them in the Coast Range, but not west of US 101. Besides, there has never been a fatal cougar attack in Oregon, according to wildlife officials.


#3: Getting attacked by a crazy person
This is what most people were really thinking about, I suspect, when they asked, “Is that safe?” The marauding rapist, the serial killer on the loose, victimizing solitary women, or anyone. I guess that’s always a possibility, anywhere, anytime, but not likely enough to worry about. I will admit that was part what appealed to me about sleeping in hiker-biker camps: I like solitude by day, but I prefer to not camp alone, particularly on the beach, particularly close to a major highway. But crime statistics do not bear out random violence a serious cause for worry on the Oregon Coast Trail. 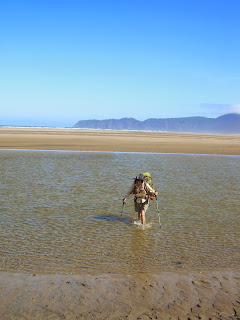 #4: Drowning while attempting to cross a river mouth
Not if you plan ahead and time your crossings by foot at low tide. Even if you were to misjudge the depth of water and get swept off your feet, the most likely worst outcome is that all your stuff gets wet. (I plan a collapsible trekking pole or two next time I hike the OCT, as the hiker in the photo crossing the outlet of Sand Lake did.) I did have something of a close call at the mouth of Netarts Bay; I had hitched a ride with some recreational crabbers, who dropped me off where I asked them to, right at the tip of Netarts Spit. Only it wasn’t quite the tip, it turned out; it was a sandbar just off the tip, and the tide was rising and I quickly realized I was actually cut off from the spit. Fortunately the crabbers had kept an eye on me and motored back to get me when I waved my arms, then dropped me off on the real spit. That was just stupid on my part.

#5 Getting caught in a sneaker wave
Sneaker waves—unusually large waves that can catch you unawares and knock you off your feet— are a mostly wintertime phenomenon, but the adage applies year-round: Don't turn your back on the ocean, not when you're right alongside it. And don't jump on logs or stumps in the drift line, as the next wave that washes in might lift it, knock you off, and pin you under it. 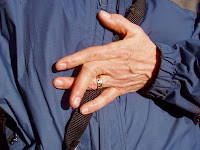 #6: Tripping on the trail, falling down a cliff, or otherwise injuring yourself
Accidents do happen. You should carry a first aid kit and have the mental wherewithal to deal with this kind of thing. But this isn’t a wilderness area; with a few exceptions (the north side of Cape Sebastian), someone’s going to be along soon to help you out if something untoward happens. Don’t assume you can call 911 on your cell phone; reception is spotty in places (Verizon seems to have the best coast-wide coverage, FYI). (Who knew to worry about dislocating a finger in a minor fall on Neahkahnie Mountain? It didn't really hurt, just looked grotesque.)


#7: Getting epic blisters
You will get blisters on a through-hike, I can almost guarantee it. Something happens to the feet when you start exceeding, say, 10-12 miles a day for days at a time. But there are things you can do to prevent them and deal with them. And they won’t kill you. 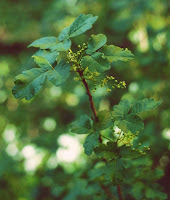 #8: Getting poison oak rash
South of about Humbug Mountain there are patches of poison oak along the trail. If you’re not familiar with it, memorize the photo at left (by Franz Xavier). It’s annoying as hell, if you’re sensitive to it; figure two weeks of itching, weeping skin. Again, it won’t kill you.


#9: Getting bit by a poisonous snake
Nope. None. Not here.

#10: Getting swept away by a tsunami
It's highly unlikely and certainly not something that should stop you from hiking the OCT. But hikers should understand a little bit about tsunami science and what to do should the ocean suddenly and alarmingly withdraw, or should a major earthquake rattle the ground for four or five minutes while you happen to be on the beach. I will address the topic of tsunamis in more detail in the next post.

Posted by Bonnie Henderson at 6:19 PM