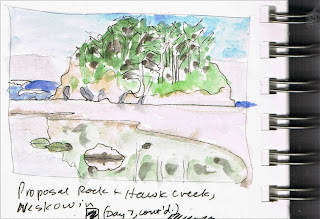 Notations such as “(Hike 33)” refer to hikes in my book “Day Hiking: Oregon Coast.”


It seems, just from scanning the map, that it should be possible to get a ride across the mouth of the Nestucca River at Pacific City, as at many other river mouths on the coast, and avoid about 6 miles of road walking. Just walk 2.75 miles south to the end of Nestucca Spit and hail a passing fisherman, or stop at the boat landing a short distance down the spit and catch a ride there. The problem lies with the landing on the south side. There is simply no safe place to land a boat near the beach south of the river mouth without risking winding up in the middle of a particularly dangerous bar. 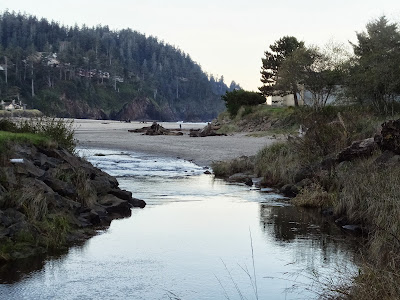 Instead, from “downtown” Pacific City, follow the shoulder of Brooten Road (or take the bus: www.tillamookbus.com) 2.7 miles to U.S. 101, then follow the highway south another 3.2 miles to Winema Road. Take Winema Road 0.5 mile down to the beach, then walk the beach 3.3 miles to Proposal Rock at the community of Neskowin. Walk alongside Hawk Creek (photo right), which leads to a little trail to the Neskowin Beach State Recreation Site wayside (flush toilets and water) alongside U.S. 101 (10 miles).


Next challenge: ascent of Cascade Head. There used to be a very handy 6-mile OCT trail section over Cascade Head that eliminated 4.5 miles of highway walking, but the northern section of that trail is now closed due to extensive storm damage (blowdown) and a large slide. There are no plans to rebuild that portion of trail due to the steep, unstable terrain.


The new route trades 2.75 miles of highway shoulder walking for 4.75 miles of forest road and trail walking, as follows: 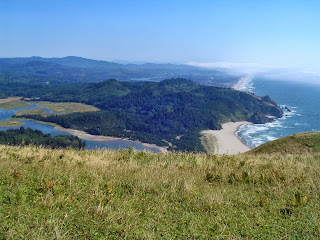 ALTERNATIVE #1:  An OCT hiker in September 2012 reported that parts of this trail are in poor condition; he suggested continuing on Road 1861 another 2 miles to the trailhead for the very scenic 4-mile trail down Cascade Head to Knight Boat Landing on Three Rocks Road (Hikes 32-33). From here it’s a 2.5-mile walk east on Three Rocks Road to US 101. This route would lengthen your hike by 5 miles, but this trail down Cascade Head provides some of the most awesome vistas on the entire Oregon Coast (see photo; you won't get this view on the official OCT route).


ALTERNATIVE #2: Consider calling a cab or taking that same bus (www.tillamookbus.com, four southbound trips a day at this writing) to hop from Neskowin to the north end of Lincoln City. Regardless which route you choose over Cascade Head, you still have 3.75 miles of highway shoulder walking, and probably another 4 to get to Lincoln City (though that may change, as I’ll discuss in the next post.)


There is no camping on Nestucca Spit (Robert W. Straub State Park), which seems a shame, nor is camping allowed almost anywhere on Cascade Head west of Highway 101 (most of which is either part of Cascade Head Scenic Research Area or part of a Nature Conservancy preserve). This stretch of the coast is just a hard place to find a tent site. There is lodging in Neskowin.
Posted by Bonnie Henderson at 8:00 AM