Camp Rilea Armed Forces Training Center is located along Clatsop Beach on the northern Oregon coast (adjacent to roughly miles 5.8 to 8.8 of the Oregon Coast Trail). Last summer I learned of a 2015 agreement between the Oregon Military Department and Oregon State Parks that allows the military to close the beach adjacent to Camp Rilea—meaning, 3 miles of the Oregon Coast Trail—whenever they are conducting live weapons training or for "other military exercises." These closures are not infrequent; they occur several times a month, year-round, sometimes for several days in a row. (Most likely closure days: Friday and Saturday, especially in summer. Could be any day of the week.) Turns out Camp Rilea has been doing day-long closures of the beach for many years (the camp's been there since 1927, certainly predating the Oregon Beach Bill); this 2015 agreement was an attempt to put some boundaries around those disruptions to public beach access, requiring the military to provide at least 24 hours advance notice of closures via a website. It also allows vehicles to transit that stretch of beach for 15 minutes at the top of every hour that the beach is closed (not enough time for hikers to walk the 3 miles, however). In fact, the agreement doesn't even acknowledge the existence of OCT hikers; it accommodates vehicles (this being one of just two significant stretches of Oregon beach where driving is still allowed) and even agrees to not do live weapons training during clamming tides. But the agreement makes no accommodation of any kind for hikers. Hikers have, in the past, been forced to wait (up to all day, or several days) or to make a long (unnecessarily long) detour. There was a website where hikers could check to see if the shooting range currently is "hot" (meaning, the beach is cosed), but there was no advance notice provided.

Frankly I don't understand how these beach closures are even legal under the 1967 Oregon Beach Bill. I appreciate that soldiers need live weapons training, certainly. I just think that this is the wrong place to do it today, for a bunch of reasons, and the legal justification I was given doesn't make sense. Given the investment other state agencies are making in improving and promoting the Oregon Coast Trail (and the ever-increasing use of the beach by the public), I hope the state agencies that are charged with enforcing public beach access and promoting use of the Oregon Coast Trail restart a dialogue with the agency that is routinely closing the beach to the public.

However my main interest is in helping OCT thru-hikers deal with this inconvenience, and after a series of emails and meeting with Camp Rilea Training Site Manager Todd Farmer, things seem to be improving (begnning with that new website, above).

ADVANCE NOTIFICATION
Before you set out on the OCT, check the website.

LIMITED CLOSURE AREA
Col. Farmer has acknowledged that the camp doesn't always need to close all three miles of beach; with certain weapons training they need to close only 0.75 mile of beach, which a thru-hiker can early transit in 15 minutes (as cars are being let through at the top of the hour). I don't know if these smaller closures have begun, and I don't know if there will be any indication of them on the website, but it's a start.

HITCH A RIDE
If you are stopped, and vehicles are being stopped and let through at the top of the hour, consider trying to hitch a ride through. Most of the vehicles on the beach seem to be pickup trucks, making it easy.

ALTERNATE ROUTE
In the past (like, last summer) soldiers stopping OCT hikers were insisting that hikers backtrack 2.1 miles to the Peter Iredale beach access in Fort Stevens State Park and, from there, wind through the park and take surface streets until they were south of Camp Rilea, a pretty horrible detour that robs you of one of the coolest parts of the entire OCT (the long, long Clatsop Beach walk). This is totally unnecessary, as Col, Farmer agreed. He told me he will instruct his people to point hikers to the 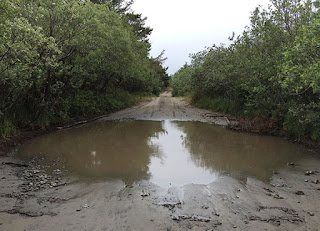 preferred alternative: exiting the beach on Delaura Beach Lane, which runs along the north boundary of Camp Rilea. From here walk quiet roads, 0.5 of busy US 101, and two miles of the Fort to Sea Trail alongside cow pastures and over a couple of dune swale lakes on cool footbridges to return to the OCT at Sunset Beach. This detour adds 2.3 miles to your OCT hike, making it a reasonable alternative. There are some massive potholes at the western end of Delaura Beach Lane;  I could not get through in March without overtopping my boots (or worse). But by early July I was able to skirt them competely.

Here is a PDF of the preferred Camp Rilea detour map and directions. I suggest you download it to your phone or print it out and have it with you on Day 1, just in case.

If you follow these guidelines but still have any trouble at Camp Rilea, I would be interested in hearing from you about your experience. Hopefully that won't happen. My thanks to Col. Farmer for taking the concerns of OCT hikers seriously when he learned about them and for agreeing to make the needed adjustments. 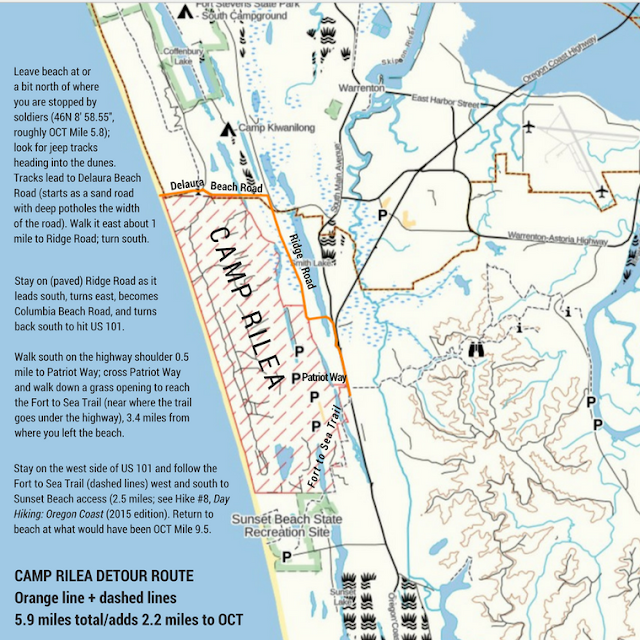