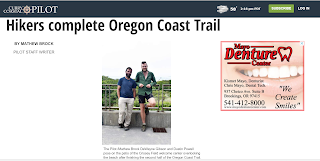 DeWayne Gibson and Dustin Powell just completed the OCT and sent me some timely updates on trail condition; I've added them to my 2018 OCT update. Here is the latest version.

The great news is that Crissy Field State Recreation Site at (nearly) the California border now has  trail register where OCT finishers can sign in and be celebrated! Took many years, but they finally got it. Since DeWayne and Dustin were the first to sign, the staff at Crissy Field actually called the local newspaper, which sent out a reporter who wrote a story, amusingly headlined "Hikers Complete Oregon Coast Trail."

Not sure where they got that estimate of 15 people a year completing the OCT (based on nothing; obviously an underestimate), and that last paragraph is just random and goofy. But I thought other OCTers might enjoy. Good to see the OCT getting some notice!
Posted by Bonnie Henderson at 2:29 PM No comments:

A Better Way to Lincoln City

JUMP TO MY MAP AND DIRECTIONS that show you how to cut off 2.2 miles of highway shoulder walking north of Lincoln City.

The official  OCT route from Neskowin to Lincoln City is, shall we say, troubled. I keep hearing that discussions are under way or plans are being made to improve the route over Cascade Head and, thence, over the Salmon River and back to the beach at Lincoln City. Right now the official route involves many miles (8 or 10, depending) of walking on the highway shoulder. I keep hoping someone (USFS) gets it together to actually do what needs to be done to reduce the highway walking here to a minimal 1 mile stretch needed to cross the Salmon River estuary:

1) Negotiate an easement with the private neighborhood at the south end of Neskowin allowing legal foot traffic up to the top of South Beach Drive.

2) Brush out the existing rough trail from there through Siuslaw National Forest land that hooks up to the Hart's Cove trail (see Day Hiking: Oregon Coast for details of how you would walk that trail to Road 1861 and options from there to the intersection of US 101 and Three Rocks Road.

4) From the south side of the Salmon River bridge, either negotiate with Westwind Stewardship Group to allow hikers to walk their road and to cut a short connector trail around Camp Westwind OR build a connector trail through Siuslaw National Forest land. In either case, that connector trail would hook up with existing trails to take you to Road's End State Recreation Site, where you can return to the beach.

This should be easy, but apparently it isn't. Maybe because of the protectiveness of the agencies managing Cascade Head Scenic Research Area? I get that. But people, we're talking about 1) a major trail (the OCT) that the Oregon Legislative has decided is a priority and needs to effectively be completed, and 2) accommodating thru-hikers, who are the user group that arguably has the LEAST impact on the forest.

My book makes suggestions for how to, unofficially, get over Cascade Head to get the best views, the least highway walking, and the best overall experience. But then you still have 4.1 miles of highway shoulder walking to return to the beach. Here is a way to cut out more than half of that. I don't know why I didn't figure this out sooner: most of the route appears in a map in my book. But that land (and those trails) had just come into public ownership when I was wrapping up the new edition of the book and things were sort of unclear. Also I didn’t understand what the road access would be off US 101. Now I get it.

There is almost no signage on this route, but the trails are all on public land managed by either City of Lincoln City or Siuslaw National Forest, and it's not confusing. This route is 0.5 miles longer than just hiking the highway shoulder.

The only sketchy part of this route is the 15-20 footsteps you take at the top of N. Clancy Road on what appears to be a driveway. My maps indicate that this is all on Siuslaw National Forest Land. It’s possible that the very start of this trail is actually on a private driveway, however (hence the “No Trespassing” sign you will see on the gate you must go through). I have tried to clarify this issue with the appropriate land managers but have not had a response. Yet. In any case, literally not more than 20 yards are sketchy ownership-wise. Go forth, hiker.

An under-the-radar option for camping in Cannon Beach 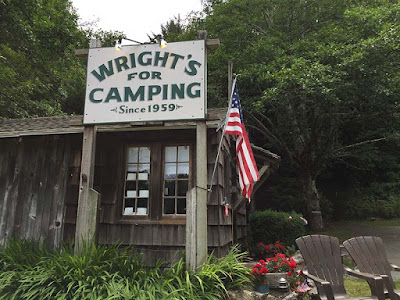 This is a belated shout-out to a great camping option for OCTers passing through Cannon Beach.

Cannon Beach has lots of lodging, most of it at the high end $$-wise, but not many options for backpackers. In fact, one (this one). There is no camping on the beach adjacent to the city limits of Cannon Beach or Arch Cape, nor adjacent to state parks (Ecola, Arcadia, Hug Point), which really limits your options. (I’m not a big fan of beach camping anyway). But depending on your schedule, you are going to need to sleep somewhere in the roughly 30-mile stretch of the OCT between the backpacker camp atop Tillamook Head and the hiker-biker camp at Nehalem Bay State Park. There is a private campground at the north end of Cannon Beach called Sea Ranch, but tent sites are $40 and are often booked in advance (no hiker-biker option there) .

Anyway, I vaguely knew about Wright’s, near midtown Cannon Beach, but it’s only open in the summer (Memorial Day weekend through mid-September) and I never got around to checking it out until now. It’s actually pretty awesome. Very small (maybe 20 sites), tents only, under tall trees, family-owned since 1959, a short walk from the beach. Funky in a super family-friendly way. Toilets, showers, and even a laundry room. They don’t advertise a hiker-biker camping area on their website, but they have one. It’s small, but they seem to make room for whoever shows up. It’s a short walk to great beer and coffee and other amenities in midtown. They charge $10 per person.

To get there, walk down the beach from the mouth of Ecola Creek to the next primary beach access just north of Haystack Rock (look for a road and creek hitting the beach). Wind through the motel complex here to the main road through town (S. Hemlock St.), follow it 3 blocks south to Sunset Boulevard. Follow Sunset Boulevard a short distance east; after going under US Highway 101 you’ll see Wright’s straight ahead on the hill.


Posted by Bonnie Henderson at 2:31 PM No comments: