Where to sleep on the Oregon Coast Trail: A meditation, and some advice

Camping on the beach seems like the most obvious option. I mean, the cool thing about Oregon (one of many cool things) is that the beaches are entirely public, not just to the high tide line but to the vegetation line. YOU CANNOT OWN THE BEACH IN OREGON. You can own an oceanfront motel, but you cannot fence off any portion of that sandy beach for the exclusive use of your customers because it’s public.


Which, I think, is awesome.


Which means you can pretty much camp anywhere, right?


Cities and towns can prohibit camping on the beach adjacent to city land, and they do. State parks (which  manages the ocean beaches) can prohibit camping adjacent to developed parks, and it does. Only in the most remote parts of the coast can you camp on the beach itself and not risk being rousted out by authorities of one kind or another (never pleasant). The beach immediately south of Cape Lookout seems to be a popular surfer camping site; that seems to work. There are places on the south coast where no one’s going to bother you. Not so the beach between the Columbia River and Gearhart; not only is camping there illegal, but you’re likely to get run over. You can camp on certain sand spits, but not all (Bayocean spit yes; not sure about Salishan Spit, but the nearby homeowners would probably prefer you didn't). The beach at Oregon Dunes National Recreation Area: no problem, though I recommend camping back in the dunes and not in on the beach per se. So, you see, it’s kind of tricky. Generally the farther south you go, the fewer people, the more remote the beaches, the more likely you can camp on the beach, or near the beach, such as back in the dunes, if it’s public land.


But beach camping is overrated, in my opinion. For one thing, it’s sandy. And it’s not level. If you’re too close to the ocean, you have to worry about high tide; if you’re too high, the dry sand gets into everything. I camped at the mouth of Tenmile Creek (photo below), between Winchester Bay and Coos Bay, and I worried all night about whether I was camped high enough. But you’re not that stupid, right?

Plus, getting real for a moment: where you sleep, you are likely to want to shit. This is not the forest, where you can dig a cat hole, do your thing, fill it back up with dirt, and no one is bothered. This is the beach. Feces don’t decompose in the sand they way they do in the forest. And a lot of people use the beach. It’s better for everyone if you strive to take care of business in an established toilet of some kind—flush toilet, vault toilet, porta-potty, whatever—of which there are many, in parks and waysides and the like. 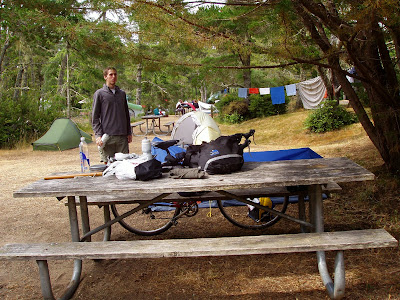 Which, in a sense, leads to my preferred alternative: Hiker-biker camps in state parks. (Photo: Hiker-biker camp at Bullard Beach State Park, Bandon. Much laundry was done, apparently.) Yes, they’re in developed campgrounds, which may not be your vision for a backpacking trip, especially if you’re a veteran of the AT or PCT, but you didn’t really think this was a wilderness outing, did you? For $6 (in 2013) you get a flat spot to set up your tent, flush toilets and potable water and hot showers (no extra fee), picnic tables (sweet for setting up a stove and cooking dinner), and like-minded people to talk to, which is kind of nice especially if, like many OCT through-hikers, you’re hiking alone. Only don’t expect to run into other hikers; there aren’t many of us. Hiker-biker camps are mainly used by cyclists riding U.S. Highway 101. In addition to hiker-biker camps in coastal state parks, there are several beachfront (or nearly so) Forest Service campgrounds on the central coast: a little more expensive, no showers, but sometimes right on or near the beach. 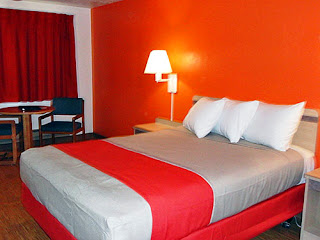 Motels are another option: obviously more expensive, but really nice after a long day of hiking, especially if the weather has been less than stellar. You do need to reserve ahead in popular areas (Cannon Beach, Manzanita, probably Lincoln City). I stumbled into an inexpensive motel in Pacific City and another (Motel 6, at right) at the south end of the bridge in Gold Beach (where I spent about two hours in the bathtub). I also spent a night in the shared dorm room at the Sylvia Beach Hotel at Nye Beach in Newport; I wouldn’t do that again. (Love the artsy, funky hotel rooms there, but the dorm room was overcrowded and a little strange.) I do want to point out to any out-of-state readers that it is not unusual to find oceanfront lodging (not necessarily fancy, but still oceanfront) n Oregon for $100 or less. Sometimes much less.

Yurts? Only if you want your entire trip to be scheduled in advance. Yurts (small, round, wooden structures with heat, bunks, etc.) in state parks are popular and need to be reserved well in advance. Give yourself more flexibility and just buy an ultralight tent instead. After a few nights not staying in yurts, you may be money ahead.