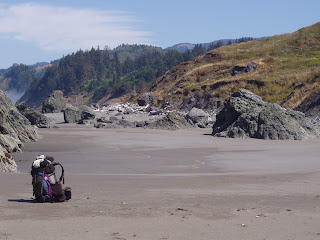 In September 2008 I made a through-hike of the northern half of the Oregon Coast Trail, backpacking from the Columbia River to Yachats. In July 2009 I completed the trail, backpacking from Yachats to the California border.  In 2009 OregonState Parks' OCT website went live, but I find it lacks a level of detail hikers need, and it directs hikers around bays (which ruins an OCT hike, as far as I’m concerned) rather than giving tips for getting rides across river/bay mouths. While I work on the next edition of the book, I’ll be blogging about the trail in greater detail, including updates that I and other hikers (you?) have sent me and continue to send. If you use this guide to hike the OCT and you find any changes or discrepancies with your experience, please post a comment or e-mail me via my website (bonniehendersonwrites.com). (UPDATE: The third (2015) edition of my guideook Day Hiking: Oregon Coast is out and includes pretty much everything in this blog and more, up to when it went to press!)


The OCT is far from a wilderness experience, but that's part of its charm; it takes in the coast's small towns, where you can stock up on groceries or eat in cafes, as well as the state park campgrounds and waysides arrayed along the shore, and motels are frequent enough to allow "inn-to-inn" hiking in most places. But walking it for more than a day is still an adventure. Creeks and bay mouths must be crossed by wading or by catching a boat ride (to avoid a long detour by road). Campgrounds or other suitable camping spots are widely spaced in places. The trail route is not well marked everywhere. And there are long stretches on the south coast with few services.


Here are some OCT basics before launching into trail descriptions/updates on forthcoming blog posts.


PERMITS: No permits are required to walk any portion of the Oregon Coast Trail, though some trailheads charge day use fees for parking.


WEATHER: The Oregon coast gets an average of at least 60 inches of rain a year (up to 100 inches on the north coast), but only 10 percent of it falls June through September, when river and creek levels are also at their lowest. August and September are probably the best months to hike this trail, though hot weather in the inland valleys can draw fog and strong winds to the beach, usually for just a day or two. Summer's prevailing winds are from the north, so most people hike north-to-south.


CLOTHING AND GEAR: It’s nearly always breezy; I wore lightweight hiking pants every day of both of my through-hikes. I wore high-quality trail running shoes (above, at end of hike) as I do backpacking everywhere. Some people wear gaiters on soft-sand sections like the New River area (south coast), but it’s not really necessary. Rain gear is essential, just in case.


WATER: No need for a water filter on the north coast; there are plenty of parks and waysides where you can fill up (and I really wouldn’t want to drink from a creek here). Carry two 1-liter bottles and you'll be fine. On the south coast, however, there are very long stretches with no publicly accessible tap water. Consider carrying a filter or purification tablets. (I actually made do mostly by carrying two extra 1-liter bottles, filling them when necessary).


CAMPING: Camping on the beach is permitted most parts of the Oregon coast. Exceptions: It's not allowed adjacent to state parks, nor to many towns. Obviously you need to be cognizant of how high the tide is likely to rise if you camp on the beach. Forest camping is possible in a number of spots; there is a lovely backpacker camp at the top of Tillamook Head with snug log shelters (nothing like this anywhere else on the trail). Camping has been outlawed at Oswald West State Park, on the north coast, which does problems for through-hikers; more on that in a future post. One great option (that I mostly used) is to camp at state parks. All coastal park campgrounds are open year-round and have designated hiker-biker camps, used primarily by cyclists. For $6 (2013) you get a campsite in an area shared with like-minded folks, along with restrooms and showers (no extra fee). They are spaced widely enough, however, to require fairly long days of hiking from one to the next, and some are more attractive than others. There are also some Forest Service campgrounds along the coast (such as at Cape Perpetua); some are open year-round and some only May-September.


LODGING: An inn-to-inn hike is doable on the more populated northern coast (but trickier to pull off on the south coast due to long distances between lodgings in places). A trip built around availability of lodging results in a more constrained itinerary than that of a backpacker (resulting in some long days), requires more planning, and costs a lot more, but you enjoy the pleasure of a lighter pack as well as a bed and dry room at night. In the fall, when there are fewer tourists, it may be possible to walk inn-to-inn without advance reservations on the more developed north coast. Likewise, you could investigate reserving yurts at state parks (you would still need to carry everything but a tent, however).


TIDES: Some points (smaller headlands) may be rounded only at mid- to low tide. Some creeks and smaller rivers can be waded only at low tide (like the mouth of Sand Lake, below). And many beaches are much easier to walk at low tide than at high tide, when only the softer, steeper portion is dry. A good online source for Oregon tide tables is Hatfield Marine Science Center. 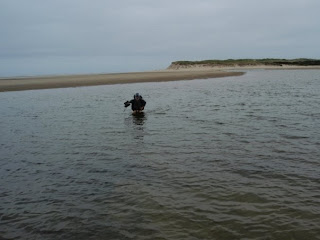 RIVER/BAY MOUTH CROSSINGS: In a number of spots, especially on the north coast, you need to get a boat ride across the larger, deeper river mouths to avoid making a long road detour around a bay to reach a bridge. Obviously, a ride is preferable, because it allows you to stay on the beach (and anyway, it's more fun). In most cases I was able to hail rides from recreational boaters, without any prearrangement. In future posts I will provide names of marinas and outfitters known to offer ferry service to hikers for a fee.


GROCERIES/RESUPPLY: Towns are spaced closely enough to allow you to buy groceries (and even restaurant meals if you like) fairly often; no need to send food boxes ahead, as on the Pacific Crest Trail.


TOILETS: With a little planning, you should be able to take care of major bathroom needs by using restrooms in state and city parks and waysides (along with the occasional pit stop to pee on the beach), except in some wilder stretches of the south coast. Carry a trowel to bury wastes well away from water.
DISTANCES: I averaged 17 miles of hiking a day (ranged from 12 to 23); you can hike shorter distances, but through hikers often need to go 15-20 miles to get from one state park to the next (or, if you're hiking inn to inn, one motel to the next).