This post is dedicated to all the 2017 Pacific Crest Trail refugees snowed out of the Sierra and defaulting to the Oregon Coast Trail this summer! A totally different experience. But awesome in its own way. Not a wilderness. Definitely an adventure.

I’ve been kind of haphazard (and sometimes late) about annual updates. Turning over a new leaf this year. I'm attaching a PDF of my 2017 OCT Update sharing with everything I know about trail conditions this year, plus any changes that have occurred (that I know about) since my book came out in fall 2015, PLUS corrections of just plain mistakes.

I apologize for the somewhat awkward format of the OCT trail guide in Day Hiking: Oregon Coast. The editors really wanted it to be mainly a day hiking guide, since not that many people actually thru-hike the OCT. Not anymore! My sister-in-law Jeanne, in Gearhart, told me this morning that she looked up the beach and saw at least five groups of backpackers heading south. I think this is the year the OCT gets discovered. Maybe it will spur parks officials to make some much-needed improvements, like adding a few backpacker campsites and filling some of the remaining trail gaps.

A few words to PCT refugees, in particular, just setting out on the OCT:

OCT 2017 HIKERS: If you have more updates (especially on south coast, where I don't go so much), email me and I'll incorporate them.Thanks!

Posted by Bonnie Henderson at 4:17 PM No comments:

Two updates for the north end of the Oregon Coast Trail

Hey, it's getting to be OCT hiking season: the river levels are down, the weather isn't great yet but should be pretty soon, and it's just time to hit the trail. I have a couple of updates that might be helpful to this year's hikers, in addition to updates I posted in the middle (or near the end) of last summer. 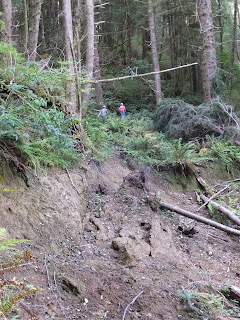 1) Ecola State Park: The OCT over Tillamook Head is fine (rooty, rocky, muddy as usual, but fine), though there was a big landslide there prior to last summer that I believe you still just negotiate around (photo at left), and crews expect to be busy through June getting the trails in this park back into shape. The big news this year is that the next section of trail (from Indian Beach to Ecola Point, 1.5 miles) has had a major slide. That portion of the trail is closed as a result, and the rebuild, if/when it happens (not this summer) will take the trail off the shoreline and way up onto the ridgeline. Read the advisories from Oregon State Parks. I heard from someone who went ahead and walked it anyway and said it could be done, but park rangers are begging us not to do it; it harms the forest, is dangerous, etc. Instead, just walk the (narrow, paved) park trail to Ecola Point. (I believe that road is also closed at the moment to cars but should be reopening for the season.) Be aware that this is Oregon's most-visited day use park; watch for cars! 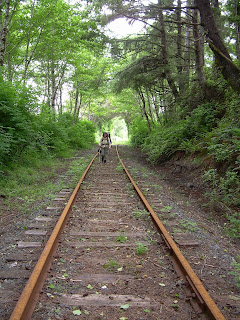 2) Barview County Park to Garibaldi, at north end of Tillamook Bay: I suggested, in my book, that you consider walking the railroad tracks about 1.5 miles instead of the highway shoulder. This is totally unofficial and up to you (both have risks). I will add that the the only train that operates on those tracks is an excursion train that runs between Garibaldi and Rockaway Beach, between 10 am and 3 pm daily mid-June through Labor Day (weekends only May 21 to mid-June and all of September). So if you walk it in the early morning or late afternoon, you shouldn't have a problem. (Especially if you spend the night at Barview, just get up and get going early). Unless they happen to have a special train scheduled! Or you could take a break and catch the trail from downtown Rockaway Beach to Garibaldi. Oregon Coast Scenic Railroad.