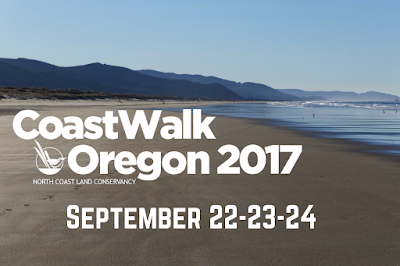 I suspect most of the people who chance on this blog are do-it-yourselfers. But sometimes it's nice to get a little support. Which is why I feel I would be remiss if I didn't mention that registration has just opened for CoastWalk Oregon 2017, an awesome supported three-day walk on the Oregon Coast Trail. I happen to work for (and volunteer for--pretty much spend most of my waking hours trying to figure out how to support) North Coast Land Conservancy, which CoastWalk Oregon benefits.

It's designed as a kind of complement to Paddle Oregon and Cycle Oregon, but it's only three days, and it's only 75 people, so way more intimate. It is not as all-inclusive, however; you need to arrange your own lodging and buy most of your own meals. Most of the registration fee is a straight-up donation to NCLC, which is transforming the Oregon Coast by conserving wetlands and forest and prairies and every other type of native habitat they can get their hands on.

Go to CoastWalkOregon.org for details. Or check out the sweet little 1-minute video at Facebook.com/coastwalkoregon.

And feel free to contact me for more details. I scouted the route, and I'll be at the Welcome Party Thursday night and on the trail early each morning putting up wayfinding signage at trail junctions. It was a blast last year (the first year). At least one participant used it as a sort of test run; he's planning to hike the entire OCT himself this summer. Whatever it takes to get outside!

Posted by Bonnie Henderson at 9:17 AM No comments: